Jazz Foundation carries an illustrious history of staying at the forefront of relief operations during humanitarian assistance and disaster response efforts.

In the nation’s dire times of need, Jazz and its Torchbearers have marked their presence in the most remote of the disaster struck areas and has wholeheartedly extended assistance to the affected communities.

Disaster relief campaigns are conducted with the purpose of alleviating the suffering of those whose lives and livelihoods have been disrupted as a result of the calamities. Jazz has worked closely with National and Provincial Disaster Management Authorities, Armed Forces and other relevant government lines departments during disaster relief campaigns.

Association with aforementioned institutions has ensured that Jazz’s assistance in the form of food and non-food consignments get to their due-deserving. 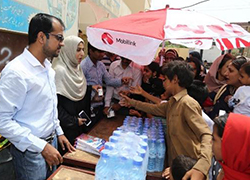 The heatwave that gripped Karachi and interior Sindh in the month of Ramzan claimed over 1300 lives. As a response, Jazz Foundation took the lead and initiated a relief campaign that reached out to the victims of heat strokes, hospitalized for treatment at health units and hospitals. Jazz Torchbearers carried out several relief aid distributions activities at 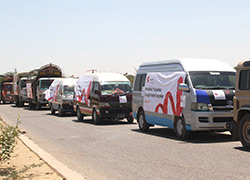 The first consignment of the Jazz Foundation, in collaboration with the Pakistan Navy reached out to .The relief aid, comprised of supplying food goods to sustain more than 8000 individuals over a period of two weeks.

The 2nd leg of the Campaign included provision of an additional two weeks of food supplies to 5,000 individuals. Jazz’s CSR team along with 25 Torchbearers traveled to Tharparker to ensure safe delivery and distribution of the relief items.

Jazz Foundation carried out an elaborate relief campaign in response to the fatal bomb blast at Abbas Town, Karachi. The campaign included distribution of food/ration bags and domestic rehabilitation packages for a total of 60 affected households. Various distribution points were organized to cater for the dislocated families. Torchbearers in collaboration with District Administration participated in various distribution drives. Jazz’s on ground assistance was helpful in restoring the spirit of life amongst the anguished community of Abbas Town.

In September 2013, the District of Awaran in the province Baluchistan experienced a series of Earth Quake that killed almost 900 people and left many more injured. Jazz was amongst the first to respond and reached out to Awaran and neighbouring affected Districts with food, water and medicinal assistance. The first stage of early relief was followed by two more bulk dispatches. While the shipment to Awaran and on-ground distribution of relief goods were carried with the help of Pakistan Navy and Baluchistan Disaster Management Authority.

Jazz Foundation also set up collection camps at various Jazz premises to collect non-food relief items for the earthquake affectees of Baluchistan. Under the campaign, employees were encouraged to donate any used or new articles including clothing, bed sheets, blankets, kitchen utensils, curtains and floor mats. Collected items were handed over to the Pakistan Navy for onwards shipment.

Foundation's Disaster Relief Initiatives in 2012 and Before

Jazz Foundation and its Torchbearers have a proud history of responding to Pakistan’s time of need. One of the most noteworthy examples of the empathy and desire to help fellow citizens came during the earthquake that struck Pakistan in 2005. In addition to the millions of rupees of relief and rehabilitation contributed by Jazz Foundation to those affected by the calamity, Jazz Torchbearers also volunteers thousands of hours in alleviating the suffering of those affected.

In 2009, Jazz Foundation also took the initiative to support ‘Internally Displaced Persons (IDPs)’ who had been impacted by the strife and deteriorating security in Swat. Jazz Foundation committed PKR 81 million towards the establishment of a Jazz Camp for 7,000 people.

Pakistan encountered one of the worst natural disasters in its history in the shape of devastating floods. In this difficult time, millions of Pakistanis immediately needed our help and support.

Together, Jazz and Orascom Telecom committed more than Rs. 236 million towards flood relief in addition to contributing thousands of volunteer hours. This to date is one of the largest relief initiatives from the private sector. Jazz has been recognized by the Overseas Investor’s Chamber of Commerce and Industries (OICCI) as top donor in flood relief amongst member companies.

Jazz also donated prefabricated sheets worth Rs. 140 million to WHO which will be used as Health Units across Pakistan. In addition to these shelters, Jazz with the support of Orascom Telecom Holding has committed a comprehensive relief-package, worth Rs. 85 million for the flood affectees. Additionally, over Rs. 10 million have been raised by Jazz employees through their salaries and friends and family, SMS donations, and other private donors.

Our teams have reached more than 116,200 people in far-flung areas including the surroundings of Multan, Muzaffargarh, Nowshera, Layyah, Charsadda, Swat, Thatta, Sukkur, D.I. Khan as well as smaller towns and villages across Pakistan. We provided dry food rations such as flour, oil and lentils as well as non-food items including towels, kitchen utensils and hygiene kits for the homeless. Jazz just completed its first phase of houses built for the flood victims to facilitate the rehabilitation process.

Jazz torchbearers and franchises helped identify areas that were in need of help and were active in distributing ration items in those areas with the help of the armed forces. As a result we were able to reach out to villages where no aid had been distributed and villages which were ignored by traditional NGOs and international aid agencies.

Jazz was the first company to set up an SMS code to raise funds from external sources for flood relief. Jazz also launched an internal fundraising drive. Jazz Employees at all levels donated generously from their salaries and we were able to raise Rs. 700,000 in the first four weeks of fundraising.

While many other organizations just donated funds, Jazz not only donated funds and goods but the time of its personnel and encouraged its staff to volunteer in the field, to visit places and identify underserved regions. Jazz torchbearers sacrificed over one thousand hours towards flood relief including weekends.

Jazz remains committed to providing relief to flood victims. With funds raised by employees and commitments made by the management, Jazz is going to expand its flood relief efforts in the near future. We will continue to provide relief goods and will also be constructing homes for people who lost their homes to the floods in Sindh.

As flood water once again inundated hundreds of villages across Pakistan, Jazz Foundation reached out to the flood affected. Jazz was the first corporate organization to mobilize relief for the regions South Punjab and Baluchistan providing aid to over 26,000 people.

Jazz’s initial flood relief activity, organized in September 2012, had focused on victims in the vicinity of Rojhan, DG Khan and Rajanpur. As a result of this quick and coordinated action, the Jazz Foundation was the first to provide relief through supplies of food and water to nearly 12,000 flood affected people in South Punjab.

As flood waters began to inundate the southern half of the country, Jazz Foundation partnered with the Pakistan Navy to distribute flood relief in the most hard-hit areas of Baluchistan. Jazz Foundation contributed 120 tons of food and water supplies, with Pakistan Navy organizing logistics, transportation and distribution, using both air and land transport. Jazz Foundation and Jazz Torchbearers, Jazz’s employee volunteer force participated in the physical distribution of food and water supplies for over 14,000 people.

The partnership between Jazz Foundation and Pakistan Navy was acknowledged by the Chairman of Pakistan’s National Disaster Management Authority (NDMA). In addition, the Federal Minister for Climate Change lauded the efforts of Jazz in a session of Pakistan’s Senate, where Jazz was appreciated for its continuing contribution towards Pakistan’s humanitarian crises.

Back To Top
Site Index